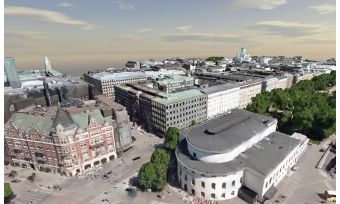 3D city models of Helsinki, Finland’s capital and regional centre, have been created and are being used to promote commercial research and development. The initiative has been made possible by leveraging Bentley’s reality modelling technology.

Helsinki is experiencing booming development and a growing urban population of more than 600,000 residents. It has a long tradition of 3D city modelling dating back to the mid-1980s. To support city growth, promote digital city initiatives, enable new commercial ventures, and implement programs with university partners, Helsinki has developed a new 3D representation of the entire city using innovative, advanced modelling technologies. “The first models of Helsinki were made in 1985. Lots of people worked with them and we are continuing this heritage. Our project is delivering a new generation of city models to Helsinki,” explained Project Manager Jarmo Suomisto.

As part of a three-year initiative, Helsinki launched the €1 billion undertaking to capture city assets and create rich 3D city models of the present-day infrastructure that could be shared with internal and external stakeholders, as well as the public, and showcase the power of reality modelling through a collection of pilot projects. Known as Helsinki 3D+, the project required mapping more than 500 sq km, surveying more than 600 ground control points, and managing and sharing large amounts of data. To meet these challenges and deliver accurate city models within the prescribed period and budget, the city required integrated, comprehensive reality modelling and information management capabilities.

Helsinki used Bentley’s reality modelling technology for geo-coordination, optioneering, modelling, and visualisation; and produced large-scale base maps and geo-coordinated utility networks with Bentley Map. Using a combination of LiDAR laser scanning and oblique photogrammetry, they gathered terrain and surface data, and captured more than 50,000 images of the city and surrounding islands, comprising 11 terabytes of data. ContextCapture enabled Helsinki to produce the final detailed 3D reality model with an overall accuracy of up to 20cm.

In addition to delivering the reality mesh, the Helsinki 3D+ project required the generation of a 3D city semantic information model in CityGML format. The model is based on a city scan in 2015 but includes new point clouds and oblique images. Point clouds were used to generate terrain and surface models while the oblique images generated textures for the CityGML model and to process the reality mesh model. The interoperability of Bentley technology enabled the team to use the same raw data gathered for the model to produce this digital city model, which is a database-based model that enables versatile, advanced city analyses and simulations that can be enriched with analytical results.

Bentley’s powerful integrated reality modelling capabilities significantly lowered the cost of producing both models covering the entire Helsinki city and outlying archipelago, with the city model being one of the largest consistent reality models in existence. “It is not only the reality mesh or only the CityGML intelligent model. We need both. Having two models extends applications for digital city initiatives, research, and development.” stated Suomisto.

Significant to the success of the Helsinki 3D+ project was the ability to efficiently and effectively share the models and project data and collaborate with stakeholders and the public. “We want to get the people of Helsinki involved with these models and understand them,” explained Suomisto. “For example, we have [implemented] a new citizen interaction platform for city planning.” The team enlivened the models and produced animated visualisations for presentations to the public and private sector using LumenRT, enhancing understanding to achieve citizen buy-in and make the best use of the models for the benefit of the community.

Utilising Bentley applications, Helsinki has opened its data to a host of stakeholders, optimising information mobility and the utilisation of the models to ensure the city is at the forefront of digital city initiatives. With an open data approach, Helsinki is making the models available for free to citizens, private companies, and universities for use in commercial planning and development spanning the tourism, telecommunication, and power supply industries.

With two innovative city models, optimal data management, and open data sharing, Helsinki has built a platform for developing new ways of working. When integrated into the city’s internal processes, the models provide realistic timetables, reduce errors, and digitise operating chains because they have real-time data flow, resulting in significant savings. City vendors can rely on consistent detailed models at their disposal, allowing resources to be allocated for the actual work as opposed to modelling each individual project.

Furthermore, having visual representations of the city that are capable of being simulated and analysed to improve infrastructure, support alternative energy sources, and ensure environmental sustainability facilitates communication and understanding of new development objectives and optimises decision making. “I don’t know any other city in the world that has a ContextCapture model and a CityGML model of the whole city.” added Suomisto.

In addition to creating the models, Helsinki also has a required deliverable demonstrating the power of reality modelling through a collection of pilot projects. The city’s open data approach supports this deliverable because Helsinki enlisted the help of outside business partners and universities to ensure they optimise utilisation of the models. With more than 12 pilot projects in the works, Helsinki has expanded the application of the models to projects such as refining energy analysis methods to achieve carbon-neutrality by 2050 and reduce dependence on fossil fuels.

The models have been applied to analyse the utilisation of solar power, flood assessments, and noise calculations. Combining 3D models with an open data approach, Helsinki has pushed the boundaries of reality meshes, demonstrating to the world what a digital city can accomplish with 3D city models.