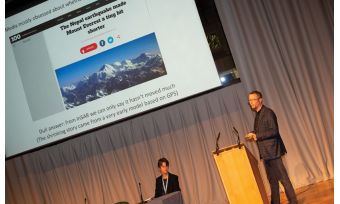 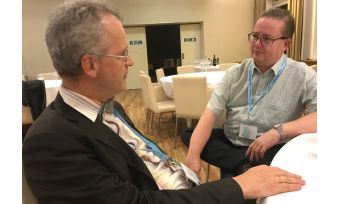 The Remote Sensing and Photogrammetry Society (RSPSoc) conference for 2018 was organised jointly with the National Centre for Earth Observation (NCEO) and the Centre for EO Instrumentation (CEOI) and was held at the University of Birmingham. The meeting was a happy match of academic and institutional remote sensing covering new developments in technology and applications with the theme of Earth Observation into the Future. Sub-themes running through the sessions were machine learning, collaboration through partnerships and innovation. The table explains the mission of some of the partnerships.

The conference kicked off on Tuesday evening with an icebreaker reception followed by the first keynote talk. Christian Heipke, President of ISPRS, skillfully blended an after-dinner speech with a technical presentation on deep learning. He showed that Convolutional Neural Networks (CNN) based on computer vision techniques could give results which improved on current supervised classification of remote sensing images, although CNN needs much more training data as it takes longer to use multimodal data such as existing databases and geometry. The discussion after the talk and in later sessions confirmed the potential of such methods, but also reservations on how much additional information could be extracted, and how human knowledge and machine knowledge could be combined. Artificial Intelligence (AI), Machine Learning (ML) and Deep Learning (DL) are terms that are used interchangeably and cropped up in many presentations and discussion during the conference.

The second keynote given by Josef Aschbacher, Director of Earth Observation at ESA, explained the ESA missions in the three categories of science, Copernicus, and meteorology and stressed the importance of the policy of free and open data and the challenges of big data. EO is the only way to globally map and model carbon, oceans, ice and methane, essential parameters to monitor climate change. Aschbacher also noted that the UK is a very important member of ESA and will remain so, despite possible complications because Copernicus is jointly funded by the EU and ESA. He also referred to the NewSpace revolution (the emerging commercial space industry) and said that he wanted to develop a European capacity for EO, rather than an ESA capacity, based on disruptive innovation in EO learnt from Silicon Valley where venture capital and fast implementation are available, using non EO technologies from business and gaming companies.

Tim Wright, director of NERC-COMET, gave the third keynote on the topic of 'Monitoring our deforming planet with Sentinel-1: from colliding continents to subsiding houses'. He considers Sentinel 1, with C band radar and 44 images per 12 days to be a game changer. He illustrated the importance of EO data in generating timely information to help response and understand the tectonics. He gave examples from Nepal and New Zealand for the study of Earthquakes and showed the application of InSAR for volcanoes. He showed that measurement of strain over a long period can predict areas of risk with no instruments on the ground. Data is available at http://comet.nerc.ac.uk/COMET-LiCS-portal. Wright also showed examples of movements at a smaller scale in the UK at Satsense Ltd.

Keynote 4 was given by Massimilliano Vitale, General Manager and SVP, Berlin Operations of Planet. Unfortunately, your correspondent was unable to hear this presentation, nor the third plenary which looked at EO into the future.

As well as the keynotes, there were three plenary sessions, dealing with overarching issues. The first of these was on ‘The Future of Downstream EO’. Radiant.Earth, now the Radiant Earth Foundation is a non-profit organisation with a technology platform offering data and consultation and works in developing countries with the Gates Foundation. Simon Reid from the RHEA group presented data cubes as a good way to use EO data as they package large, complex data sets in an accessible form. Mark Wronkiewicz from Development Seed presented an AI-Assist mapping toolbox for augmenting human capabilities. He suggests that machines should work more like robots and humans work more like people and that we should prioritise areas where humans are needed. Owen Hawkins discussed the Earth-i approach to generating products which meet customer needs.

The panel discussion following the presentations threw up some interesting issues. One member of the audience asked what are the skill gaps? Answers from the panel included EO experience, Python, communication and cloud processing, and all expressed the need for new recruits to EO to understand the context. Work experience and internships can give this through programmes like SPIN. After the session, one delegate said that she had experienced a problem in recruiting people with GNSS expertise. Another member of the audience asked, ‘When will we never have to touch an image again?’ The answer: not for a long time, probably never.

The second plenary concerned EO data government. The first presentation described an EO data infrastructure which is designed to encourage the use of EO data across Defra. A speaker from London Economics presented a report on the value of EO data to government (https://bit.ly/2PRGlB3). This study had found that the biggest use of EO data by government is for agriculture, with transport having the greatest potential. The major problems are a fragmented market, funding pressures, access, and processing. A major advantage is that innovation is strong in the UK. Alistair Duncan presented the LIDAR programme at the Environment Agency which includes new coverage of the UK, and free and open data. In the final session, Martin Jones presented the Geospatial Commission and encouraged organisations and individuals to present evidence to the Commission.

The rest of the conference comprised parallel sessions dealing with a wide range of technologies and applications ranging from new instruments to the full gamut of applications using EO data. One interesting session was on Future Missions, Instruments and Technologies in which 14 speakers each gave 4-minute talks on innovative projects. This included using GNSS signals reflected from the Earth's surface to measure geophysical parameters such as wind speed; an Agri-Lidar on a Skimsat platform at 260km with a 3-year life; and rapid revisit small satellite constellations (SSTL) in non-sun synchronous orbits to give 40 revisits per day.

There was a small exhibition comprising institutional displays and commercial displays. The extensive poster displays covered all areas of technology and applications.

The conference gave an excellent overview of EO in the UK and Europe. There is considerable optimism in the UK with funding schemes available, especially for developing instrumentation and for encouraging young people to go into remote sensing through schemes such as SPIN. The conference also engendered some interesting discussion on machine learning. It seems that ML must be mentioned in every presentation, even if only applying lip service. There is no doubt that there is a need for it to conduct analytics in EO data and that there is potential, but not yet fulfilled. 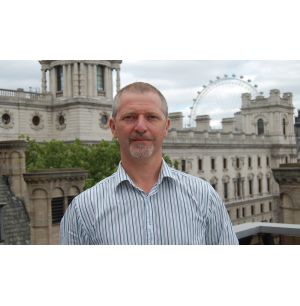 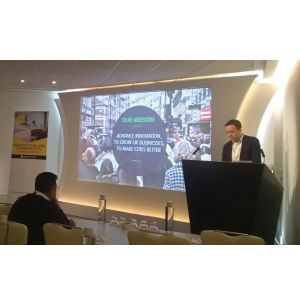 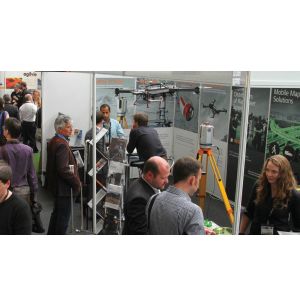 Be there or be Lost - GEO Business 2017
Latest article