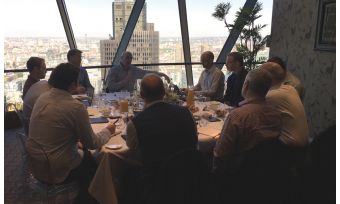 Operational Intelligence (OI) was the topic for a breakfast meeting at a restaurant near the top or London’s iconic Gherkin tower. The hosts were Esri UK, who had invited three of their customers to join a roundtable discussion with a group of journalists.

To answer the question ‘What makes OI?’ it seemed a good place to start by first answering ‘What is OI?’ It is the information which underpins the response to planned and unplanned events. As one participant put it, it is a combination of historical data (experience), which can be analysed to find patterns and trends, predictive analytics and real time data to provide situational awareness and a common operating picture. Typically OI is used to aid the response to crises, where the emergency responders need access to reliable information and to understand it quickly. Visualisation is the key to this and it only works with reliable communications. Response often involves different groups of people working together so datasets also have to be interoperable.

David Abernathy-Clarke described a system called Exodus for evacuation planning. It involves the typical GIS task of identifying properties at risk in a particular situation and prioritising the risk, but the results from a straightforward query tend to be impractical and in this case involved piecemeal evacuations. So the system was adapted to incorporate the practicalities of directing officers on the ground. He now claims to be able to prepare evacuation plans within minutes – a job that used to take hours. Responders report back via Exodus as they proceed with the evacuation thus providing information to the control room on its progress.

Tracking of people and assets is now routine. The Environment Agency has tagged all its equipment so that it automatically knows where it is at all times, without needing to phone the custodian. Likewise, police radios are GPS-enabled so that the officer in charge knows where they are at all times.

You might think that the intelligence half of OI, the listening and analysing side, would be separate from the Operational side – the management and response, but this is not so. As mentioned above there is a feedback loop and responders provide intelligence to the control room. Again, automated georeferencing makes the process efficient and practical. In the EA’s case, images and reports from the field provide information to the control room and flood event data feeds back into the flood modelling scenarios, which are used to predict the effect of flooding. Wessex Water encourages feedback as a way to improve the productivity of call centres, with GIS at the centre of the experience. Thus, a complaint about a hole in the road can become an opportunity to let the customer know why it is there and engage with them about related matters.

Part of a trend

Increasingly you find the same terminology appear in different settings. For successful OI we were told that you need ‘one version of the truth’. There are several other parallels with BIM, which is also intended to promote productive collaboration. Conflicting media messages have in the past been a problem which a single version of the truth now helps to avoid. There are also parallels with the current development of data services for autonomous vehicles, which need a map data background but also real time intelligence to determine their position and to sense and avoid transitory obstacles.

Collaboration depends upon connectivity and interoperability. For connectivity the police use Airwave radios. There are serious drawbacks with using cell technology, for which the EA’s answer is a number of vans equipped to act as mobile Wi-Fi hotspots.

Esri UK’s ArcGIS technology is at the heart of interoperability for the three customers and the common platform also makes it easier to develop new apps. These can be requested, written quickly, tried out and then either kept or discarded. The common view was that configuration was better than customisation.

OI combines information sensed by people with data sensed by machines, whether they are real time sensors sending data from particular locations to the control room or fitted to moving platforms, such as drones, planes or spacecraft, which can provide a bigger picture context in near real time. Described amusingly as ‘silicon-based’ rather than ‘carbon-based’ lifeforms, they do have the advantage of doing as they are told!

The participants were asked for their best practice tips for OI. The answers; be consistent; if you want to do ten things, do five but do them well; and listen to the user community, invest in their time.