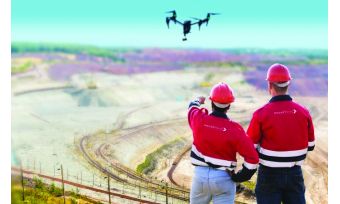 Heliguy has supplied a quarter of a million pounds of drone stock to major mining companies in Africa, who are using this technology to increase safety and obtain fast and accurate data.

As one of DJI’s largest and trusted European enterprise channel partners, Heliguy has delivered a suite of DJI equipment to bolster fleets in the Ivory Coast, Nigeria, Namibia and Burkina Faso.

These companies – who cannot be named as they are under a non-disclosure agreements (NDA) – chose to work with Heliguy because of their in-depth industry knowledge and experience, on-demand technical and maintenance support (which includes an R&D consultancy) and the ease of accessing the vast pool of drones, sensors and ancillaries.

Heliguy’s support and rapid repair service are vital for companies in the mining industry, as the drones are pushed to their limits in difficult conditions and harsh landscapes – with dust, dirt and extreme weather the norm.

Supplying Africa is another show of strength by Heliguy, which is a recognised DJI Gold Partner, certifying their expertise and services to interested enterprise customers, and was recently awarded a Top 10 Partner of the Year (Europe) award from DJI Enterprise.

Drones a Vital Tool for Mining

The fact that Heliguy has supplied £250,000 of drone stock to mines in Africa – and an additional quarter of a million to sites around Europe – shows how integral this technology has become for the industry.

Indeed, UAVs (unmanned aerial vehicles) are an essential tool for this type of work, playing a vital part in creating digitized mines of the future, where real-time planning and execution can be conducted to improve efficiency and production.

Drones are being deployed for various tasks such as exploration and inspection, security and surveillance, mapping, calculating the volume of stockpiles and for surveying, helping to provide rapid visual access and multiple views.

Information gathered from a drone can then be downloaded and converted into 3D visualizations of the site which can be used to inform the way in which future site operations are planned, adapted and carried out.

But perhaps most importantly, they increase the safety of mining activities, removing the need for people to operate in potentially hazardous areas. For instance, UAVs can be used to inspect and monitor high-risk areas, including stockpiles, mine slopes, ore passes, tailings dams and chemical-storage facilities – all while taking people away from these dangerous parts of a site.

Drones can also check for the presence of personnel in a blast area and measure fragmentation or the direction of dust movement after a blast.

How DJI Drones Can Help Mining

With this in mind, which drones are available to help mining companies? DJI has a range of suitable UAVs, which are reliable and rugged performers in the harsh environments of a mining site, from hostile temperatures to oceans of dust.

The Matrice 200 Series V2, the Phantom 4 RTK and the Mavic 2 Enterprise Zoom and Dual were among the fleet of drones which Heliguy shipped to Africa, along with sophisticated thermal and zoom sensors. So how are these drones ideal for mining?

Drones in the DJI M200 Series V2 – including the survey-grade M210 RTK platform – are ideal tools for deploying on mining sites, thanks to their versatility and enhanced safety features.

The V2 Series can be integrated with a range of payloads, including the XT2 thermal, the Z30 zoom camera and the X7 and X5S sensors, which yield high-class imagery.

Thermal imaging is particularly useful for mining companies, playing a significant role in productivity and profitability.

For instance, this technology is an important diagnostic tool for monitoring the condition of equipment and machinery, identifying possible problem areas early on, planning maintenance with minimal disruption and detecting problems that are not visible to the naked eye. Thermal cameras can also see through air particulates such as smoke, fog and dust.

The M200 Series V2 can also be flown with third-party payloads, meaning users can carry out professional aerial measurement applications with an oblique camera or Lidar, multispectral or hyperspectral sensors. This is useful for surveillance and high-precision topographic mapping and 3D modelling.

The M210 and M210 RTK are also able to carry multiple payloads at any one time, increasing productivity and efficiency.

The drones in the M200 Series V2 are built to endure adverse environments – with water-resistant protection and the ability to operate in temperatures from -20°C to 50°C. This is ideal for the harsh conditions associated with mining. The aircraft also have smart features such as an advanced obstacle-avoidance system and a downward vision system for precise hovering and landing.

The DJI Phantom 4 RTK is a compact and next-generation mapping drone solution with a high-resolution camera and the ability to capture centimetre-accurate RTK (real-time kinematic) data.

Key features include its centimetre-level positioning system, the ability to support PPK (post-processed kinematic) as well as RTK, a precise imaging system, compatibility with the D-RTK 2 Mobile Station and it can support mobile SDK.

To make the most of your image data, the Phantom 4 RTK is compatible with DJI Terra – a PC application that integrates autonomous route planning, aerial photography, 2D and 3D model reconstruction, and model measurement. This all-in-one solution helps industry users improve the efficiency of internal and external workflow and make the work a lot easier.

The Phantom 4 RTK was tested by Terra Drone Europe (formerly Skeye BV). The industrial inspection company was pleased with how it performed, describing it as ‘a good survey tool that can yield high accuracy’.

One of the tests was on a processed coal site in The Netherlands and the data showed that the results using no grounds control points (GCPs) and only RTK flight positions was very comparable to having the site well covered with GCPs. Why is this important? Requiring less GCPs saves time and improves safety. Read the full accuracy report here.

The DJI Mavic 2 Enterprise Series are extremely portable, can be deployed quickly and are ideal for close-range and internal inspections on mine sites. DJI AirSense allows the drone to avoid hazards in the sky which enhances airspace safety by giving you instant real-time positioning alerts on nearby manned aircraft.

The spotlight accessory, which comes on both versions of the drone, is a particularly important feature, helping to illuminate dark areas, while the Mavic 2 Enterprise Dual boasts a thermal camera, with features such as adjustable parameters for emissivity and reflective surfaces, and multiple display modes including infrared and visible.

Another important feature of these DJI drones is their transmission range of between 7km and 8km, meaning that they can be operated from afar, away from danger.

This article was written by Heliguy.