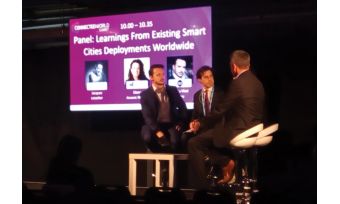 I have reported from conferences held in a variety of settings, from five-star hotels to a converted agricultural hall, but never an empty factory so authentic that it probably looked the same on the day the factory closed. This extreme interpretation of the shabby chic concept was the location chosen for the Connected World Summit 2018. As in previous years, this year’s event consisted of several streams, of which the most interesting was Connected Cities.

This report picks up on some interesting points made on day one of the two-day conference. The first session of the day was a presentation by Patrick Fisher of Pulse. His company makes advertisement displays which look rather like the displays often located at the ends of bus shelters. The adverts are the only source of revenue for the company, but that is not all these innocent-looking boards do. They also contain sensors, which can measure atmospheric pollutants and footfall of passing shoppers amongst other things.

In addition, in each one there is a ‘public access’ defibrillator, which can be used to save lives. Apparently, there are 30,000 deaths per year in the UK from heart attacks which take place outside hospital and the survival rate is only 9%. Fisher said that where the defibrillators are installed, the survival rate increases to 59%.

Pulse data is published in real-time as open data. Footfall data is useful for retailers and air quality data can be used to manage traffic. The screens can also be taken over by the authorities for public messages during emergencies.

Kathy Nothstine from Nesta gave a talk on the use of drones in cities. Nesta is, perhaps surprisingly, a charity. She noted that there have been two trends in the last couple of years. Firstly, that drone technology has advanced rapidly and secondly that it has been driven by a technological ‘push’ from the manufacturers rather than demand ‘pull’. Nesta have partnered with five cities to find out what applications they can envisage for drones and built a case study for each city. Two case studies use drones to deliver supplies for the NHS, one of which delivers between Southampton and the Isle of Wight. Other studies use drones to support the fire service, support construction projects and respond to traffic incidents. Northstine identified issues holding up drone development as technical problems, investment in infrastructure, regulations, alignment of stakeholders and engagement with the public. The most significant difficulty is that although individual drone operators can gain exception from CAA regulations, this is a process which is not scalable. If we reach a situation where there are many drones flying around, there will have to be some means of coordinating them.

Keeping on the air transport theme, Damian Kysely from the Aviary Project spoke about urban air mobility – flying cars. New technology electric Vertical Take-off and Landing, or eVTOL is cheaper and more reliable than traditional helicopters. He suggested that travel times could reduce dramatically. There would however be challenges, including the aircraft systems and air traffic management, certification of aircraft, social acceptance and infrastructure in terms of take-off and landing points.

Perhaps the most interesting aspect of the morning was the idea of piggy-backing sensors onto street furniture. In addition to the talk by Pulse, BT has been doing similar things and manufacturers are also enabling street lights with sensor capabilities.