Richard Groom travelled to the West End for Bentley’s Year in Infrastructure event. This annual event attracts Bentley users from all over the globe for conference sessions, networking and an awards ceremony. I attended a two-hour session during which the contenders for the reality capture category presented their projects and were then questioned by the judges.

First up was “Smart Campus of Hong Kong Science Park”, presented by Hong Kong Science & Technology Parks Corporation & Chain Technology Development Co. Limited. The project is seen as a pilot for development of Smart Hong Kong. The presenters showed a quick-fire video with a list of attributes of the smart city, which included unmanned ice cream kiosks as well as the more conventional, and one might argue largely already present, cashless payments, biometric ID and EV charging. They claimed to have created a 3D model of the site in two days using Bentley’s Context Capture – internal as well as external. The model is the core of a ‘geo-intelligence’ hub to be used for smart construction – most of the park is finished but they are still adding buildings. The objective is to control and manage construction progress and discover problems early. The hub will also assist planning; smart energy management, using IoT sensors in the buildings; and facilities management. The model can be used for planning 5G; planning mobility using autonomous vehicles and drones; security; and for marketing property without the prospective purchasers visiting the property.

Next, Skand Pty Ltd presented ‘Building Envelope Inspection Powered by Machine Learning and Reality Modeling for RMIT University Brunswick Campus’ in Melbourne, Australia. Skand is a two-year-old start-up company with less than ten staff. They captured imagery of six buildings using sensors to detect sixteen categories of defect. The software allocates a risk category for each defect. They observed three higher level passes with drone photography and one pass as low as possible – 10m from each roof and façade. They use machine learning to improve the detection of defects but there is still the need for human overview. They use mesh to mesh comparison to detect change.

The final presentation was from Transport for London - Major Projects Directorate on the Piccadilly Line Upgrade. This was all about expanding the capacity of the Piccadilly line by introducing new trains but with very little space to manoeuvre. Data was collected using laser scanning with a 3D accuracy requirement of 20mm. As well as ensuring that the new trains fit in the tunnels, they also must fit the platforms with acceptable gaps. But the old trains also must fit so that both can operate whilst the new trains are introduced. TfL used microstation for the design and to analyse the platform gaps. 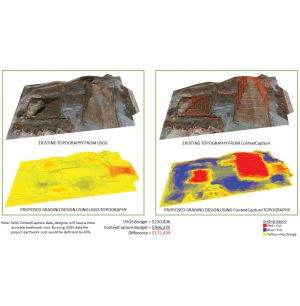