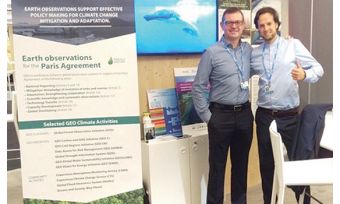 Steven Ramage has spent most of his career in the geospatial sector working for Navteq (now HERE), 1Spatial, Open Geospatial Consortium, Ordnance Survey and what3words; with a short spell running Ramage Consulting and advising the World Bank and UN-GGIM. He has also been involved in location strategy, policy and innovation at various points in his career and worked extensively overseas.

Geomatics World: Please give our readers some information on why you were attracted to work in GEO

Steven Ramage: I joined the Group on Earth Observations (GEO) in 2016 to raise awareness and share information about the wealth of freely available resources in the GEOSS Platform, as well as the depth and breadth of the GEO Work Programme. Essentially, I work to explain the usefulness and value of open Earth observations data and information and the impact of GEO. My job is working with GEO members (over 100 UN Member States) and partners, known as Participating Organisations, on our engagement priorities, as well as to lead our strategic communications. I’ve also been leading our commercial sector engagement with support from the GEO Executive Committee. The role helps me use my experience, knowledge, skills and international network of industry professionals to further GEO’s mission.

GW: What is the mission of GEO and what are its main activities?

SR: GEO is an intergovernmental, global partnership connecting government institutions, academic and research institutions and the private sector. The goal is to work with national governments, as UN Member States, to understand the value, usefulness and applications of Earth observations for research, policy and decision making. This means that we are coordinating a large number of activities relating to Earth observations that help identify gaps and reduce duplication in the areas of sustainable development and sound environmental management.

The organising principle of GEO was, and continues to be, a series of Societal Benefit Areas (SBAs), ranging from agriculture and biodiversity to disasters, urban infrastructure and water resources management. Today, our engagement priorities are linked to international policy, namely the Paris Agreement for Climate, the Sendai Framework for Disaster Risk Reduction and the United Nations 2030 Agenda for Sustainable Development. For each of these priority areas, the GEO community is working collaboratively to determine how and where Earth observations add value.

For example, with the Sustainable Development Goals (SDGs), there is a GEO initiative called EO4SDG (Earth Observations in the service of the Sustainable Development Goals). EO4SDG is led by the USA (NASA) with extensive support from the European Space Agency (ESA), INEGI in Mexico and the Japanese Space Agency (JAXA), and is working closely with the UN Statistics Commission and the UN Committee of Experts on Global Geospatial Information (UN-GGIM). The activities of EO4SDG are focusing on the use of Earth observations integrated with national statistics to help monitor, report and deliver the SDGs. There are similar global, collaborative activities in the areas of climate and disasters.

Together, the GEO community is creating a Global Earth Observation System of Systems (GEOSS) to better integrate observing systems and share data by connecting existing infrastructures using a suite of common standards. There are now more than 400 million open Earth observation data and information resources in the GEOSS Platform from more than 5000 data providers. These resources can be freely accessed from the GEO website, the GEOSS portal or using the GEO application programming interfaces for machine-to-machine communication.

Ministers of the GEO member governments meet periodically to provide the political mandate and overall strategic direction for GEO. The Mexico City Ministerial Declaration from the GEO Ministerial Meeting in 2015 saw world leaders commit to support open Earth observation data for future years. The next Ministerial meeting is in 2019 and we understand the UK may be interested in hosting this summit.

GW: Is there one driving principle behind GEO?

GW: How does the UK interact with GEO?

SR: The UK has been involved in GEO for many years, particularly through the Work Programme. Each country involved in GEO typically has a national GEO activity, and UK GEO is led by Defra, who sit on the GEO Executive Committee. One of the broadest national representations at the GEO Plenary last year in Washington DC was from the UK. More than ten organisations were part of the UK delegation, including Nottingham University, the Office for National Statistics, the Met Office and Ordnance Survey. There’s a great write up from Iain Williams, Defra’s Deputy Chief Scientific Adviser, that provides some additional input to this question. To read more, visit the post on GEO's Blog (4 December 2017, Earth Observations: Global Perspectives from the UK).

GW: The United Nations is involved in coordinating Earth Observation activities through GGIM and UNOOSA. How does GEO work with these organisations?

SR: Earth observations are used across the entire United Nations system, including the UN Development Programme (UNDP), UN Environment, UNICEF, UN-Habitat, UNOSAT and others. I think the important role that UN-GGIM and UNOOSA play is related to policy development and capacity building. There is a longstanding partnership here where both organisations are recognised observers in their respective communities. UN-GGIM is the global geospatial policy leader and conduit for GEO to work with national statistical offices, in particular the work that GEO does to support the Working Group on Geospatial Information (WGGI) through the Inter Agency Expert Group (IAEG) on SDG Indicators. Conversely, GEO provides input to the UN-GGIM community on activities relating to Earth observations.

GEO and UNOOSA have also worked together for many years. The most recent collaboration between both organisations has been around UNISPACE+50, where UNOOSA plans to celebrate the 50th anniversary of the first United Nations Conference on the Exploration and Peaceful Uses of Outer Space, from 20-21 June 2018 in Vienna, Austria. UNOOSA is also a Participating Organisation in GEO and a key collaborator.

GW: GEO has identified a number of societal benefit areas. How do these interact with the UN Sustainable Development Goals?

SR: The SBAs have helped to shape the GEO Work Programme. Many of the SBAs and related activities in the Work Programme align with the SDGs, for example our GEOGLAM Flagship initiative is focused on global agriculture monitoring and directly tied to food security and SDG2 Zero Hunger. Other areas include urban resilience, and through EO4SDG we have been working with the national statistical agency of Columbia (DANE) on SDG11 Sustainable Cities and Communities working with our partners at the Global Partnership for Sustainable Development Data (GPSDD), NASA and the World Bank to look at land use, land change and population growth. Also for water resources management, we have been working with the Google Earth Engine team, the Joint Research Centre of the European Commission and UN Environment on the spatial extent of water for SDG6 Clean Water and Sanitation.

GW: Do commercial organisations have a role in GEO?

SR: Yes, absolutely. The commercial sector is already engaged in the GEO Work Programme, and we use technology and broker data catalogues in the GEOSS Platform from Carto, Digital Globe, Esri and Mapbox. Esri in particular has made a significant investment in integrating ArcGIS Online (AGOL) with the GEOSS Platform, meaning that anyone can access the Earth observation resources via their AGOL account or the GEOSS Portal. We actively encourage Small to Medium Sized Enterprises (SMEs) to use the open data that is freely available and hopefully build greater insights or new business opportunities from using the data. During the GEO Plenary in Washington DC last October we invited a number of industry executives to meet with the GEO Executive Committee, and we plan to do the same again at other meetings. This provides an opportunity for leaders from the public and private sectors to share ideas and information, and collaborate with each other.

GW: What services does GEO offer the users of EO Data?

SR: I work at the GEO Secretariat in Geneva, Switzerland and we are essentially coordinating all the activities of the global GEO community (Members, Participating Organisations, Observers, the GEO Plenary, the Executive Committee and the GEO Programme Board). It is this global community that provides a host of services, whether that is through our Participating Organisations or via our commercial sector engagements. The big opportunity for GEO is to bring in the emerging companies working on data analytics tools and services and engage them more broadly in the Earth observations community.

GW: Please give some examples of the projects which GEO promotes, particularly if there are any relating to the UK?

SR: As mentioned earlier, disaster risk reduction is one of the GEO engagement priorities and the UK has now appointed James Norris (from Ordnance Survey) on secondment to the GEO Secretariat. He will work with the GEO community on aligning our activities across the entire GEO Work Programme. In particular, disaster resilience with UN-GGIM and UNISDR the Sendai Framework, GEO-DARMA and GSNL will be his areas of focus.

The UK is also working on data cubes, a concept pioneered in the GEO community by Digital Earth Australia as part of a AU$50m investment. A data cube is an analytical engine developed to routinely transform Earth observations into actionable information for users and decision makers. The Australian data cube has organised more than 30 years of open Landsat data across the entire Australian continent to deliver information products of use to decision makers; this approach is now being replicated around the world particularly with the work being done by GPSDD and the Committee on Earth Observation Satellites (CEOS). GEO is advocating for regional data cubes, and ultimately a global data cube, which will put analysis-ready data into the hands of those who need it all over the world.

GW: How do you see the future of Earth Observation globally?

SR: At GEO Week 2017, we laid out our plans for the next 10 years. A key change in our community will be the move from a data-centric approach to a user-centric approach. In practice, this means that our work will be more user-needs driven, and the products and services produced will be end-user ready. Getting actionable information into the hands of those making decisions that impact us all is an important mission, and one that the GEO community is working hard to achieve.

The rate of change in Earth observations is staggering and I can see a number of new private sector organisations really making an impact, including those from the UK. This is good because government structures and policy development cannot possibly keep up with the rate of change, so they can benefit from the tools, services and experience available from the private sector. I see a number of governments globally now starting to understand and really make use of Earth observations (I would say the UK is fairly advanced in this aspect) and the previous hype around many other technologies and approaches that can turbo charge Earth observations processing, analysis and application, such as machine learning, deep learning and Artificial Intelligence is now reality.

I probably sound like a broken record, but I believe it’s still all about collaboration and human interaction. The technology must be fit for purpose or it will not be used, and over time we will figure out how to communicate the value of Earth observations for the benefit of humankind.